The United States Postal Service is in danger of going bust.

And Democrats, Hollyweird actors, the corporate press, and plenty of Republicans are rallying around a single battle cry right now:

This is the same USPS that has LOST $69 billion of taxpayer money since 2007, and according to Postmaster General Megan Brennan, will lose $13 billion this year alone.

Oh, and the USPS has a whopping $120 billion in pension and other post-employment unfunded liabilities – equal to the GDP of Ukraine.

Now, the wealthy elite want to steal more of your money to bail out this inefficient and worthless institution that still to this day has a legally-enforced monopoly on sending anything defined as a “letter.”

This is akin to bailing out steamboats in the age of speedboats.

And incidentally, the USPS has been a failure since the age of the steamboat.

The year was 1844, and the U.S. Postal Service maintained a monopoly on delivering mail. As with all enforced monopolies, their rates were sky-high and service was crap.

Back in the 19th century, a rogue anarchist, abolitionist, entrepreneur, and one of the first American agorists, made it his mission to do what all agorists are instructed to do:

His name was Lysander Spooner and he conducted an independent study on exactly how much it cost to send mail through the government and was shocked by his findings.

A letter sent from Boston to Albany, NY written on a 1/4-ounce sheet of paper and carried by the Western Railroad, cost 2/3 as much as the freight charge for carrying a barrel of flour the same distance.

Spooner was so indignant at what he discovered, he decided to create his own mail service to compete directly with the corrupt USPS monopoly, with the goal of lowering rates, providing superior service, and of course…

Making a tidy profit at the same time.

Spooner was a scholar of the Constitution and found that, although it granted the federal government the right to set up a mail company…

…it didn’t prevent private citizens from doing the same. 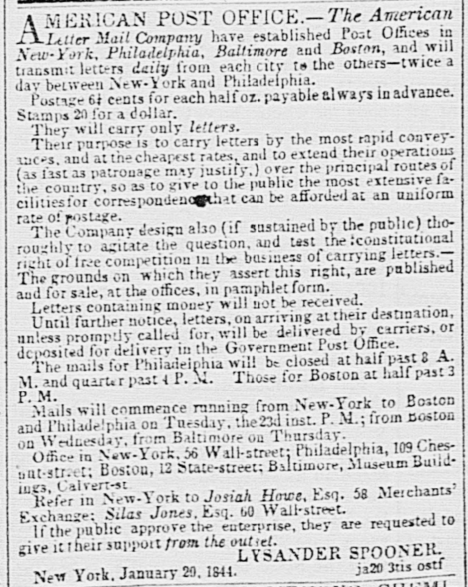 He promised to deliver letters faster, cheaper, and farther than the U.S. Post Office.

He also said he wanted to “test the constitutional right of free competition in the business of carrying letters.”

The public loved it.

The government was furious.

It wasn’t long before lawsuits came pouring down on Spooner and his cohorts.

He won some. He lost some.

In one verdict, the U.S. Circuit Court expressed doubt that the U.S. had the right to monopolize the transportation of mail, ruling in Spooner’s favor.

Soon after, Spooner got his first major victory:

The Postmaster General asked Congress to lower mail rates. In March, 1845, a reduction of postal rates was approved.

But Spooner wasn’t done yet…

And, in 1851, Spooner scooped up another victory:

But immediately following this decision, Congress passed a law protecting the government’s monopoly on the distribution of mail.

However, because the public had become accustomed to lower rates for letters, Congress finally lowered their rates to just 3 cents to deliver mail anywhere in the country.

As far as Spooner was concerned, this was a massive victory for himself, free markets, and ordinary Americans across the country.

He proved that courage, competition, and capitalism were all you need to effect serious change.

He didn’t call his Congressmen.

He simply created something better and forced the government to improve its own practices.

UPS, FedEx, DHL, and many other “parcel” companies have proven how efficient, effective, and economical the market is when delivering packages for profit.

The same will occur when they’re allowed to deliver “letters” for profit as well.

The lesson for you is simple:

Create and use any and all alternatives to State-enforced monopolies if you want to effect real change in the world.

Inside Counter Markets, we show you many alternatives to the rigged political and economic system, and teach you many ways to create your own alternatives to be freer, wealthier, and more effective agents of change.