Three economists at the University of Chicago and the Federal Reserve Board studied the effects of Trump’s 2018 tariffs on imported washing machines in a new research paper titled “The Production, Relocation, and Price Effects of US Trade Policy: The Case of Washing Machines” and concluded that (italics added):

Despite the increase in domestic production and employment, the costs of these 2018 tariffs are substantial: in a partial equilibrium setting, we estimate increased annual consumer costs of around $1.5 billion, or roughly $820,000 per job created.

President Trump’s decision to impose tariffs on imported washing machines has had an odd effect: It raised prices on washing machines, as expected, but also drove up the cost of clothes dryers, which rose by $92 last year. What appears to have happened, according to new research from economists at the University of Chicago and the Federal Reserve, is a case study in how a measure meant to help domestic factory workers can rebound on American consumers, creating unexpected costs and leaving shoppers with a sky-high bill for every factory job created.

Research to be released on Monday by the economists Aaron Flaaen, of the Fed, and Ali Hortacsu and Felix Tintelnot, of Chicago, estimates that consumers bore between 125% and 225% of the costs of the washing machine tariffs. The authors calculate that the tariffs brought in $82 million to the United States Treasury, while raising consumer prices by $1.5 billion.

……
The goal of all those moves [tariffs] was to push production….to America. The study authors credit Mr. Trump’s tariffs with 200 new jobs at Whirlpool’s plant in Clyde, Ohio, and a further 1,600 jobs for a Samsung factory in South Carolina and an LG factory in Tennessee. That’s 1,800 new jobs, at the cost—net of tariff revenues—of just under $1.5 billion for American consumers. Or, as the authors calculate, $817,000 per job.

The researchers’ empirical findings that Trump’s washing machine tariffs cost consumers more than $800,000 per US job created is consistent with previous research including a 2012 study by the Peterson Institute (Gary Clyde Hufbauer and Sean Lowry) that estimated that the 2009 tariffs on Chinese tires cost consumers $926,500 for each of the 1,200 US jobs saved (see CD post on that research here).

A previous and more comprehensive study by Hufbauer of 26 different case studies of trade protection in the US revealed that the average annual cost to consumers per job saved was more than $500,000 (in 2016 dollars) and in some cases exceeded $1 million per year per job, see related CD post “Yes, protectionism can save some US jobs, but at what cost? Empirical evidence suggests it’s very, very expensive” that featured the table below. 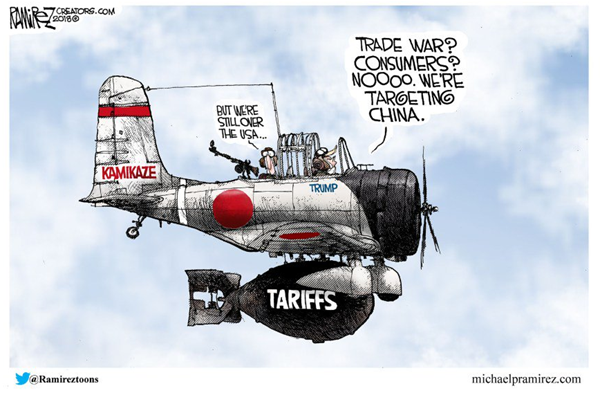 As the cartoon above by Michael Ramirez illustrates graphically, the tariffs imposed last year on imported washing machines that launched Trump’s insane trade war are imposing YUGE costs on American consumers and businesses that make the US economy worse off, not better off. Assuming the new 1,200 factory workers at Whirlpool and Samsung are making the average annual pay for US manufacturing workers of $43,000, the costs to American consumers exceeds the value of each new job by a factor of 19-to-1.

If the Dealmaker-in-Chief thinks it’s a good deal to force US consumers to pay $820,000 annually in higher costs to create a new $43,000-per-year factory job, then he might have to re-think his deal-making strategies or take some remedial economics courses in the economics of trade protection. Is that Trump’s idea of the kind of “winning” we’re supposed to get sick of? 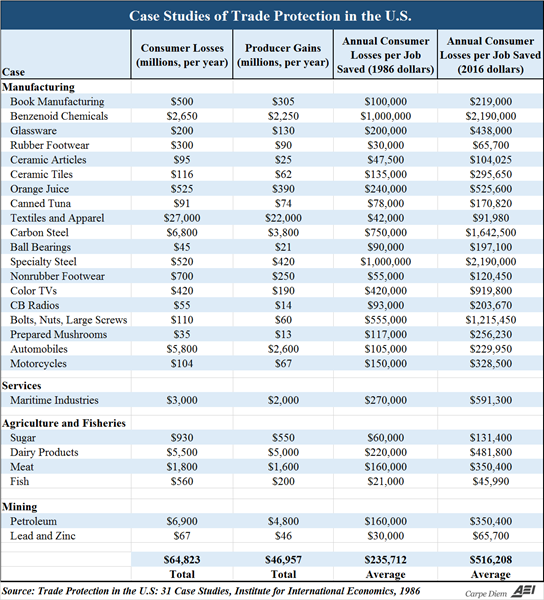 This article is republished with permission from the American Enterprise Institute.

Mark J. Perry is a scholar at the American Enterprise Institute and a professor of economics and finance at the University of Michigan’s Flint campus.