In March 1980, the University of Washington installed a seismograph system designed to monitor earthquake activity in the Cascades, with a focus on increased seismic activity around Mount St. Helens.

Starting just a few days later, a series of earthquakes, small eruptions, and steam releases took place. Near the end of the month, the peak of the mountain started to open up.

But this was only the beginning. For the next six weeks, small eruptions alternated with intermittent quiet periods. But beneath the surface, liquid magma was forcing its way upward, creating intense pressure.

News wires in Washington State reported on these changes, but few people – including scores who would later be killed – paid much attention.

As reported in LiveScience, even the USGS position at the time was that “The changes to the bulging mountain were consistent with what had been reported several times daily since the watch began and left no indication of what was about to happen.”

Then on May 18, a lateral blast involving a release of pressure over the magma chamber created “a glowing superheated cloud of gas and debris moving at nearly supersonic speeds” leaving an eight-mile path of destruction.

A second, vertical explosion at the summit took off the top thousand feet of the mountain, killing 57 people and scattering ash over seven states.

Pressure Is Building Inside the Gold (and Silver) “Volcano”

The Mount St. Helens explosion offers a fitting metaphor for the pressures building in the gold and silver markets.

Tremors are intensifying around the globe due to the massive overprinting of fiat currencies, creating debt levels without historical precedent. Financial “earthquakes” are taking place as we speak in Venezuela, Argentina, parts of the Middle East and Africa. Yet most people – especially in the West – are simply not paying attention.

Falling gold reserves of major producers have declined 26% since 2012. Gold (and silver) yields during the last few years have plummeted on the order of 50%, with discoveries of new projects headed in the same direction. The time frame from discovery to production is moving off the charts. Derivatives have been written dwarfing the total amount of precious metals ever produced in history. 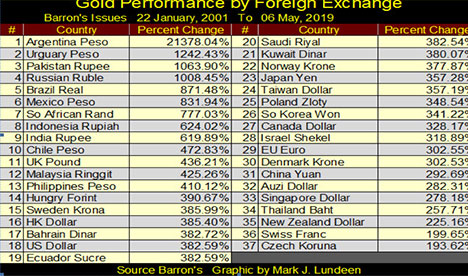 Since 2001, gold owners, even in countries where inflation has so far been low, have profited by holding this historically powerful asset protection vehicle. Their otherwise less-fortunate brethren in other locales who did the same have done very, very well indeed!

“From a risk/reward perspective, there is no asset class that has anything even close to the positive attributes that gold has at this point in US business cycle time.” Stewart Thomson, Graceland Updates

For over a decade, the policies of central banks – including the Federal Reserve – have been almost entirely unblemished by success. Keeping interest rates below what would normally be the case when borrowers and lenders agree on a loan, based upon the risk/reward economics of doing so, has created a series of asset bubbles.

This monetary malpractice has impoverished the majority while excessively rewarding the minority who can comfortably take highly-leveraged risks, knowing that “the authorities” have their back, come what may.

But now the banks are stuck between the proverbial rock and a hard place, with nowhere to go but zero to negative rates.

The result, as Jim Rickards puts it, is that the “Failure of central banks to exit from radical monetary experiments will drive the next leg of the gold bull market.”

If you wait until a crisis situation is obvious to everyone else, most of the profit opportunity – not to mention even the ability to protect your finances by acquiring “hold in your hand” gold and silver – may have disappeared or will seem to have become unaffordable (See last month’s When (not If) Silver has a Bitcoin Moment).

“Seismic Activity” in the Gold Markets Is Increasing

A number of increasingly – evident factors are building pressure under this “golden volcano.” Like the Mount St. Helens eruption in 1980, it’s difficult even for professional observers to gauge just when an explosion – not to mention its magnitude – is going to take place.

What’s important in our analysis is not precisely when gold (and silver) is going to “erupt,” but that the evidence overwhelmingly suggests we’re getting closer by the day.

In fact, as this is being written during the overnight session, gold has penetrated the $1385 level for the fourth time in the last few years. Regardless of whether this price holds, it should forcefully demonstrate – to anyone paying attention – that the preconditions necessary for an unexpected and sustained upside price explosion are being laid.

Look objectively at what’s causing the pressure to build, decide how it might affect your situation, make a plan (how much to devote, level of risk tolerance, time frame and goals) – then begin to act.

Pressure is building. You may think you’re not living in a “financial blast zone.” But neither did that doomed volcanologist who woke up that morning on a ridge 6 miles north of Mount St. Helens’ peak. After finding himself directly – and unexpectedly – in the path of an explosion traveling 90 miles per hour, his last radio transmission was, “This is it!”

Don’t let time run out before taking action to protect your finances. Learn from what others, across cultures, have done ahead of time for thousands of years, and from what millions of people around the globe are doing today.