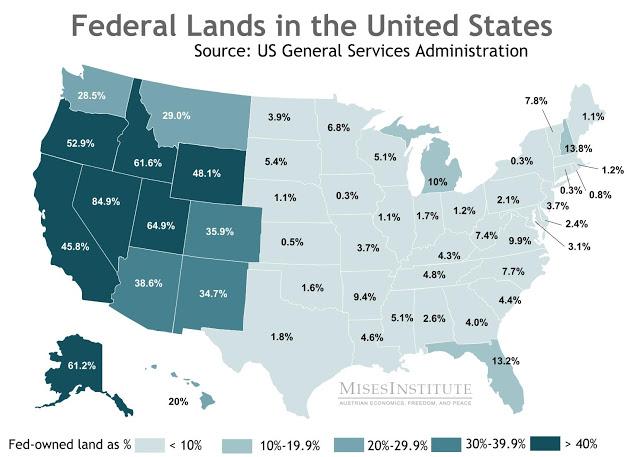 Thanks to the popularity of some public lands, known for their natural beauty, federal control of so much land nonetheless remains popular, and the idea of privatizing these lands is considered a radical idea, to say the least.

But what if these lands were somehow removed from federal control. What exactly would happen?

It is often assumed that public lands would be immediately strip mined or turned into housing developments.

The economic realities, however, suggest otherwise.

After all, because national parks, for instance, have economic value as nature preserves, privatization would not mean bulldozing over every last leaf, tree, and twig in the parks.

But, to the extent that people will turn portions of these parks from their current use as nature recreation areas to other purposes, it will be to address truly urgent economic needs.

A potential intermediate step toward outright privatization, the case has been made to transfer control of federal lands to state and local government control. To address concerns with such proposals, Ryan McMaken explains:

Contrary to the myth that public lands would immediately be sold to rapacious developers and oil drillers were the lands to fall into the hands of state or local governments, the reality is that public lands such as those in national parks are usually viewed very favorably by surrounding communities and by the voters in the states in which they are located.

As tourist attractions, and as giant recreational areas for locals, public lands are quite valuable as indirect sources of revenue for both private- and government-sector institutions in the area.

This line of argument for decentralizing public lands from federal to local government control also applies to outright privatization. If popular opinion now heavily favors the national parks, “America’s best idea” — and is repelled by the prospect of diminishing them — would not these opinions be reflected in the marketplace as well?

Consider how markets would respond. Considering the role of social media, any developer who tried to build a shopping mall in the middle of Yellowstone would seriously risk supplier and consumer boycotts, shame campaigns from environmental organizations, and the general ire of American society. Additional pressure would come from businesses that currently exist just outside these parks and depend upon them to attract customers into the area from around the world.

In part for this reason, if these parks were privatized, their new owners would likely to a large extent direct their use in ways that preserved their natural beauty, following consumer demand. For example, large portions of the parks would simply continue to be recreational areas for hiking, camping and visiting, but under private owners and land conservation trusts with their own money at risk, not taxpayers’. Given the state’s abysmal environmental record, the shift from government to voluntary management is overdue.

There’s no need to rely on speculation to see the voluntary sphere’s immense provision of nature recreation and preservation. The evidence already exists. Americans spend $887 billion annually on outdoor recreation, the largest categories being trail sports, camping, and water sports. Americans willingly pay more to enjoy the outdoors “than they do on pharmaceuticals and fuel, combined” with $117 billion in change.

Beyond outdoor recreation, the market stewards nature in more direct ways as well.

In 2015, private land conservation trusts in the U.S. protected fifty-six million acres, double the acreage of the national parks in the continental U.S. These trusts demonstrate that the public is willing and able to support the environment out of an appreciation of nature, and doesn’t need to be forced to contribute through taxation. These trusts have “Nearly $2.2 billion in endowments and funding,” over 4.6 million active financial supporters, and received 6.2 million visitors in 2015.

Private owners of ten or more acres rank the top five reasons for their ownership as, “Beauty and scenery,” “Part of home,” “Wildlife habitat,” “Pass onto children/heirs,” and “Privacy” in descending order. The number one “issue or concern” among owners of any amount above one acre is “high property taxes.” If the goal is to foster more woods and forests, one step would be eliminating property taxes such that people aren’t punished for maintaining or expanding value-adding forests.

Thankfully, as nations develop and disposable incomes grow, we can expect the market for beauty to blossom further. People enjoy living in the shade of oaks and going hiking, if they can afford to. Once basic necessities are met, people can increasingly turn their incomes to aesthetic, recreational, and charitable pursuits, which in turn fuels enterprises like residential landscaping, camping, conservation trusts, etc.

Might some privatized areas allow drilling and resources exploitation? Yes. But that happens already:

In some national parks, the federal government owns the surface lands and private companies own some of the mineral rights below the surface. This situation is called a “split estate,” . . . There are currently 534 active oil and gas wells across 12 units of the National Park System. There are 30 additional national parks with some “split estate” lands, but no active drilling at this point. 1

Land Use that Serves Humanity

If the public lands were privatized, some of it would likely be used for purposes that don’t necessarily preserve the wilderness such as drilling, mining, etc. This prospect is alarming to many, but shouldn’t be. This is because there’s no reason to assume that untouched land is necessarily the best use of land when human beings still need housing, food, and other goods that require land to produce.

Fortunately, the marketplace can help human beings strike a balance between nature preservation and other undertakings in a way that proportionately serves human needs.

How much of the country’s wilderness should remain untouched? Certainly not all of it. After all, preventing any human development whatsoever would require vacating the country of humans. The question is, what mechanism should decide how much and which land should be kept wild, and how much and which land should not for the sake of development, balancing the demand for wildlife preserves with the demand for all other goods?

If these decisions concerning tradeoffs are left to people acting voluntarily based upon private property, the question would be decided using prices and the information about supply and demand contained within them. In deciding whether to use any given allotment of land as a park, or whether to use it for something else, business owners calculate the anticipated revenues minus the anticipated costs, or profits, of each potential option.

When people anticipate the profitability of the projects available to them to decide which to pursue, they’re not engaged in something per se nefarious, as is often the connotation of the word “profit.” Close inspection of profit-seeking reveals two useful processes at work.

Second, entrepreneurs attempt to minimize costs by using up the least dear (urgently needed elsewhere) combination of resources as inputs in providing the consumers’ desired outputs. The more urgently a particular input is needed elsewhere in another application, the higher its price will be. As a result, when entrepreneurs seek to minimize their costs, they, consciously or not, are seeking to accomplish their goals while least inhibiting the resource needs of others.

That is: they’re maximizing revenue and minimizing costs to maximize profits. If a plot of land is more profitable as a drilling operation than as a piece of a recreational park, that means people express greater demand on the margin for additional fuel than for one more camping spot.

Using the government thumb to tip the scale in favor of nature recreation over fuel provision by limiting drilling on public lands prioritizes giving wealthy Americans marginally more camping spots at the expense of raising fuel prices globally for the less privileged.

A balance must be struck in the use of resources between nature preservation and all other potential uses. The market has assigned to nature an enormous, multifaceted lot. Privatizing public lands while removing taxes on property and outdoor recreation will further boost the voluntary stewardship of natural preserves. Meanwhile, market freedom will also grant the flexibility to utilize portions of these parks to serve the consumers’ most pressing economic needs outside of nature preservation.